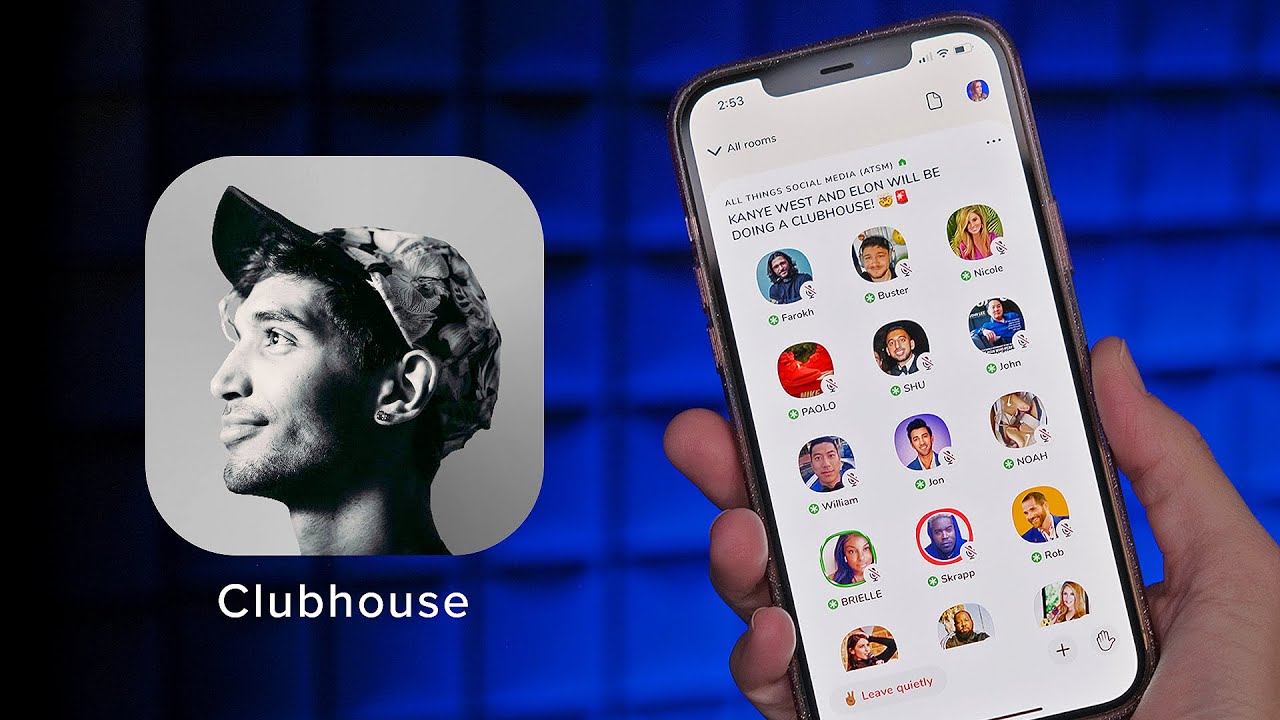 All you need to know about “Clubhouse”.. closed rooms and non stop talk

It seems that the new trend in the world of social media has come in a crazy fashion that did not occur to you. Suddenly everyone was talking about

Microsoft challenges Apple and Samsung with one of the best tablets!
Best smartphones of 2020
8 mistakes to avoid when using email at work

It seems that the new trend in the world of social media has come in a crazy fashion that did not occur to you. Suddenly everyone was talking about “Clubhouse.”

Friends and acquaintances are asking each other invitations to join this application, to explore it and spend many hours in it.

What is the Clubhouse app?

Simply, it is an application for group voice chat . When you enter the application, you can join any “room” of the existing rooms to share the conversation in it, or create a room to talk in it with your friends or with those who share your interests..

Whoever creates the room becomes the room administrator, and controls who takes the “microphone” to speak, or pulls the “microphone” from it, or invites one of the attendees to talk, and he can give the authority to manage the room to more than one person with him in the room, so you see some rooms have a large number Among the officials or organizers, and the roommaster appears next to him, a green star.

The style of instant conversations is one of the most important factors that attract many users, because it gives a feeling of closeness and intimacy, with the sessions and nights that we are used to, and with the Corona crisis and people moving away from the mix and the lack of meetings, the “Club House” program appeared” As a suitable alternative to that, even if only temporarily.

Likewise, many of those who live in the Diaspora, such as those on scholarships and others, have found in it a suitable solution to their suffering due to the distance from the people and the society that they have become familiar with since childhood, so we find in many rooms those who are completely based on his character, as if he had not united to anyone for a long time..

Who launched the app?

The app came out of Silicon Valley, and was launched by Ole Davison Paul Davison and the former employee of “Google Rohan Seth.” Rohan SethAnd secured seed funding of $ 12 million from the Anderson Horow Weitz venture fund Andreessen Horowitz.

The application appeared in April 2020, and the number of its users increased rapidly to become in the millions, and its estimated value increased, to reach in the last evaluation to one billion dollars, knowing that the application did not earn a single dollar so far.

How do I register for the Clubhouse?

If you download the application directly, you will discover that you cannot register for it. The only way to register in the application is to receive an invitation from someone who has an account in “Club House””.

And if you received the invitation and you registered in it, the application will give you a certain number of invitations to distribute to whomever you want, and it can give you other additional invitations from time to time..

Who can I find in the app?

A large group of celebrities have already held discussion sessions and seminars there, such as Elon Musk, CEO of Tesla, Mark Zuckerberg, the owner of Facebook, and journalist Oprah Winfrey.

A group of ministers and officials in the Gulf have also attended and spoke on this application, and you may enter the application to find one of them as a speaker or guest in one of the rooms.

The app has caught everyone’s attention, from all segments, so you can find government officials, businessmen, entrepreneurs, health professionals, energy, economics, musicians, writers, authors, writers, poets, actors, directors, drama and theatre writers, and people of all kinds And color.

There is a room steeped in seriousness, created by people of delicate specialization, and there are rooms in general cases, such as government decisions or social issues.

There are technical, medical, business rooms, rooms designated for women, for men and singles, for losers in their commercial projects, for failures in study, for distinguished students in graduate studies, for scholarship in America or Australia, for lovers of travel, for those who love the art of baking at home, for those who do not have a room to join, to exchange Follow-up, for those who watched Sally and burned Pokemon when he was young! And all that can come to mind.

Many rooms have also been created in which the owners of ideas and projects meet with investors directly to present their projects to them from which investments and deals may arise, or to present problems facing them and hear advice and guidance directly from businessmen.

The mixing of identities … and the lust for speech

When registering, there is a suggestion to link the “Clubhouse” account to the user account in Twitter”, Which gives the impression that the Clubhouse is an extension of the Twitter platform in its seriousness and methods of presentation, so many of those who registered at Clubhouse had their personal photos as their official photos on Twitter, as well as the identifiers.

But there are some of them who discovered the other side of Clubhouse : the entertainment side, in the meetings and evening parties in which laughter and joking do not find an end … or in the open rooms in which they talk comfortably about aspects of their practical and social life frankly and by listing secrets and scandals.

This is not compatible with their official identifiers, so they changed their identifiers afterwards, either to conceal their identities or to not appear in an official stamp in these places. This pattern was so clear that some people created rooms to mock the owners of official photos in the clubhouse.

The exciting thing about the Clubhouse is that it opened a space for people to talk, and this is what made some believe that the Clubhouse succeeded because it addressed the lust for speech of humans. There are many who enter rooms only for the purpose of talking and not listening, and when the room manager gives them”The mike “for speaking you will find them expressing their joy and gratitude.

Some of them state that he is upset with other rooms because he moves from room to room and no one allows him to speak, knowing that these rooms talk about different topics and different specialties.

There are people who have created rooms for this purpose, so they make the address of the room a clear question: Do you give your son a mobile device?, Did you borrow from a bank? How many books do you read in a year? This is so that the visitor enters it, reserves its turn, takes”The microphone “answers the question, then goes out and searches for another room in which it is easy for him to obtain” the mic”.

One of the most important differences of Clubhouse from others is its high ceiling of freedom, as it is an instant messaging application, and direct audio recording is prohibited from the device itself in order to preserve the privacy of users, (of course it is possible to record in traditional ways), and this direct conversation cannot be monitored in any way..

That is why a lot of people talked about abuses taking place. Some women talked about harassment happening to them, and press reports mentioned the establishment of some racist rooms, and rooms that spread rumors and misinformation.

With the increase in these cases, the CEO of Clubhouse announced the appointment of monitors for content, but there are doubts about its usefulness, and the age of 17 years has been determined to be the minimum age for registration in the program, because it is a completely unsuitable place for young people.

These qualities raised the ire of many, and there were calls recently to leave and boycott the Clubhouse program, because it calls for vice, deviation, and it is full of destructive ideas, and these calls began to receive an echo and support from some influencers and celebrities who began to speak publicly and warn people against using this application.

There are also those who attacked the application because of its time-consuming, the normal use of the application means time that may reach several hours per session, and therefore its daily use means a waste of a lot of time, from what we saw in the Clubhouse who creates a room, whether comic or serious, and the session lasts for hours and hours.

And sometimes people leave it to sleep and then return to join it in the morning, this pattern made some people open a room called (the permanent room) with the challenge of keeping this room open for as long as possible.

The party has a place

In another room, a girl entered and spoke in a good manner, and the official granted her the right to be responsible. Suddenly, a large group entered, and this girl appointed them all responsible, and changed their image to the Nega turtles, and announced the kidnapping of the room.

And another room, they announced a competition among the public, but whoever participates must put his picture when he is young, so if you enter the room you will find all of them pictures of children, as if you entered a meeting place for children of a kindergarten or nursery.

30 Startup Business Ideas to explore in 2021

Stunning closeup of a head of resting pet cat

30 Startup Business Ideas to explore in 2021

Stunning closeup of a head of resting pet cat

Just how to arrange an effective meeting

32 Words That Can Change Your Life

sell my junk car near me

The coronavirus pandemic once again reminded us of the importance of doing business online. If we were not currently in the digital age where it is [...]
Read More
Cholesterol

What everyone is saying about vaccination schedules. 5 bs facts about health questions everyone thinks are true. Why cholesterol lowering food is on c [...]
Read More
Fashion

For everyone who asks about the best place to store perfumes in the summer, here is the experts opinion on the appropriate conditions for storing pe [...]
Read More
© 2021 Sorriamais.net. All rights reserved. Designed by Website Directory